I’ve been thinking about making an SMD LED card for a while and as my friends Ky and Jenny were departing from Falmouth for Brighton, I though it would make for a good present. Here’s a video of the finished thing.

I started by drawing out the circuit schematic in Eagle. I based it around the videos I’d seen for making a LED knightrider circuit using a 4017 decade counter and a 555 timer. Here’s a link to the page I used.

A basic explanation of how it works is that the 555 timer is set up as an astable pulse generator, so the ouput of the 555 oscillates between 0V and 5V(low and high). This is routed to the decade counter. The decade counter has 10 outputs, 9 of which stay low and 1 is high. Each time the 4017 input goes from low to high, the output pin that is on moves to the next pin. This basically cycles through the ouputs, which are in turn connected to groups of LEDs.

Each ouput pin of the 4017 drives between 1 and 5 LEDs. This requires between 20 and 100mA of current. The 4017 is only rated to give 20mA so I had to put a MOSFET inline with each ouput. This acts as a switch that only uses a small amount of current to turn on or off but connects the LED groups directly to the main power lines.

To adjust the frequency of the 555 output, which changes how fast the 4017 cycles through the LEDs, I added in a very small potentiometer and also a surface mount slide switch.

Below is a schematic and parts list which includes Farnell order codes.

Once I had the schematic sorted, I went about laying it out on the board in Eagle. After spending a while laying it all out I printed the design to a PDF using CutePDF to ouput it as a vector image to do some graphic editing.

I could then open it up into Illustrator and play around with the lines. I added in some text and made a few of the signal lines curved.

At this stage it could be used as an etch resist pattern for use with the toner transfer method or similar. I use a little Roland MDX15 CNC machine. It uses a print driver that I have to create the cutting lines. I did this by using the offset path function.

Here’s some images of cutting it out 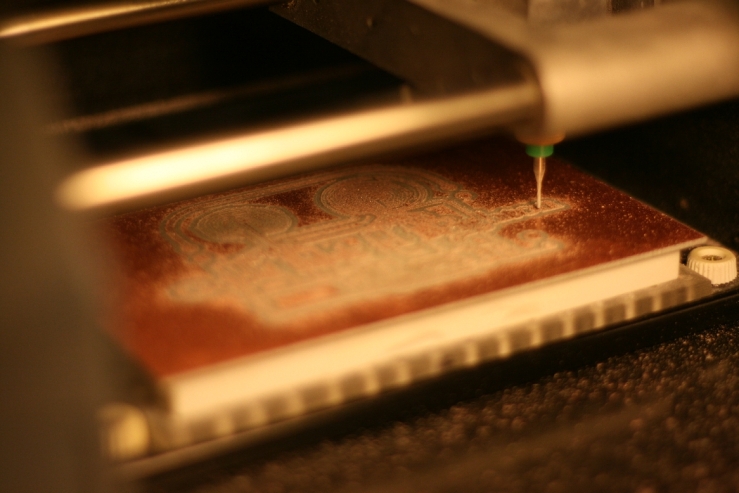 I then had to do some of the most fiddly surface mount soldering I have done, but it turned out OK in the end.